As the world’s policymakers and largest automakers gear up for an EV future, consumers will follow suit.

Coming on the fifth day of his presidency, Joe Biden’s announcement that the federal government’s vehicle fleet would become fully electric was a signal that the electric vehicle market is primed for acceleration. Because despite how common EVs are as an idea and regardless of how fast the market has grown to date, EVs are still niche in America. The government’s 650k fleet constitutes almost half of how many EVs are currently on the roads. After the shock of 2020, car companies can have the confidence to know EV uptake will receive a turbocharge.

Though the inflection point for EVs has not yet arrived, it is easy to see that it is not far off. The question could be if it happens soon enough. A Princeton report says in order to meet net zero greenhouse gas emissions by 2050, at least half of all new cars sold need to be EVs by 2030.

EVs reached majority market share in Norway in 2020, but accounted for only about 2 million units sold worldwide. According to Bloomberg NEF, by 2030 28% of new cars will be EVs, too late according to the Princeton report.

More than half the world’s EVs are sold in China, where there is about 5% market share, and EVs in some European countries have more than 10% market share, but EVs in America are sitting at around 3% of new vehicles sold each year. As government policy and market forces steer toward EVs, broad adoption should follow.

The Covid-19 pandemic had a large impact on the auto industry. During April, in the depth of the pandemic, sales volume in America dropped by 49%, to a level only marginally better than the worst month of the 2008-2009 financial crisis. For the entire year, sales were down 15%. China’s quick clampdown on the virus made for a rapid recovery and its vehicle sales decreased only by 6%. Europe was hit hardest, dropping 24% over 2019.

Though sales were weak in the Spring, production in America practically came to a complete halt for about eight weeks. It bounced back in Q3,  giving the American economy a huge boost.

Some pre-pandemic trends that affect EV uptake look set to continue, as consumers have shown a preference for larger vehicles and manufacturers increase their EV offerings.

Picture an EV in America and it’s probably a Tesla Model 3 sedan. Or maybe it’s a Toyota Prius. Both cars are small and in a declining segment. These are the EVs for the early adopters.

A more accurate representation of the American market is its perennial bestseller — the Ford F-150 pickup truck. The Light Truck segment, which also includes SUVs and vans, has continued to grow in popularity since 2013, when it led Cars by only 2 percentage points. Now it claims 76% market penetration. People want spacious, family-sized, plush vehicles with relative fuel efficiency and plenty of cargo space. On the production side we find the same trend, but with less separation.

Each element of the Light Truck segment is growing. CUVs have shown growth every year but one since their inception in 1995. They now have 43% market share. Together with SUVs, they comprise more than half the market. Pickups, too, have grown to 20%, likely their highest share since World War Two.

Auto manufacturers increasing model availability should have a big impact on EVs’ uptake. Brattle Group, an economic and finance consultancy, estimates that every 10 additional EV models increases EV sales by 8%. There are at least 12 EV pick-ups in various stages of production. 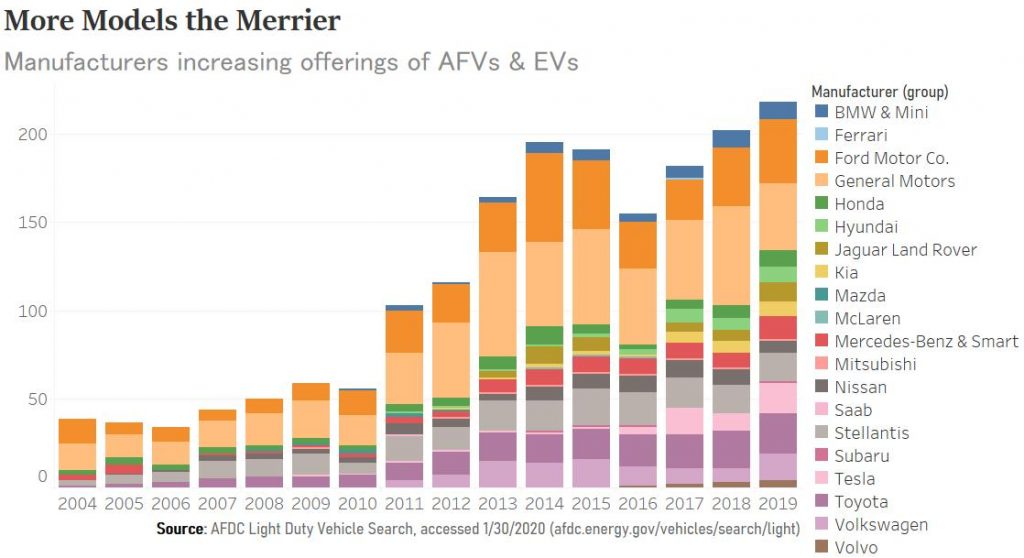 Sedans are almost novelties in the American market and the lack of EVs in the Light Truck segment partially explains their general weak uptake. Car companies appear to be filling this gap as more models become available. Ford’s 2021 Mustang Mach-E is an SUV, not the traditional roadster. In perhaps a symbol of its new electric pivot, this year GM is relaunching the notoriously gas-guzzling Hummer as an EV.

So while customers should soon have more offerings to choose from, manufacturers and policymakers are also addressing consumers’ stated top reasons for not choosing EVs in the first place: Lack of charging infrastructure and range anxiety. While many people will charge their EV at home, public charging stations are key for those without that option. Highway charging stations will also quell worries about range anxiety for long-distance trips.

The need for a robust charging network is being recognized from all angles. Car manufacturers are investing in charging technology, batteries, and partnering with charging station companies. GM and EVgo will install 2,700 new stations in the next five years. Utility companies offer expertise, rebates, and special charging rates. Governments provide funding and subsidized or free public charging. The Biden administration has announced it will invest in 500,000 new charging stations. Even oil and gas companies are inching into the space. Shell has bought a charging company, Greenlots, and Chevron has placed plugs at five of its gas stations.

The upshot is that if the number of EVs in the US does rise, as projected from 1 .5 million in 2020 to 10-35 million by 2030, then the electric power sector will have to see investments of $75-125-billion to sustain the additional load.

Range anxiety can be ameliorated by a more robust public charging network, as well as better batteries, but most EVs have more than 100 miles of range and many have more than 200. Experts often discuss batteries in terms of EVs achieving cost parity with ICEs, because they are the most expensive component. A battery can cost as much as $12,000 in the production of an EV, about twice as much as a traditional engine. Though batteries have been improving their density (power) and decreasing their cost (by 87%, 2010-19), cost parity is not expected to arrive until mid-decade.

EVs have achieved such success in Norway because the government has made them extremely affordable through incentives: no hefty import tax, no sales tax, no registration fees, free access to toll roads and free parking in some areas. Like Biden’s procurement plan, such subsidies are a policy tool governments can use to expand the EV market.

The bluntest and yet most effective policy instrument for accelerating EV uptake could be to institute zero-emissions vehicles (ZEV) mandates. Thirteen countries, including India, China, France, Canada, and the UK, as well as 31 subnational governments, such as California and Massachusetts, have committed to selling only ZEVs by particular dates, usually some point within the next 20 years. If China and India alone meet their ZEV targets, 43% of the world’s population will live in jurisdictions under ZEV mandates by 2040. Brattle Group calculates that states with a ZEV mandate have 26% higher EV sales.

For all of EVs’ momentum, the complete electrification of the auto industry in the next 20 years would constitute a veritable revolution. Yet serious obstacles remain to achieve such a monumental task. Commitments and announcements could prove little match for systemic changes, such as transforming electricity grids. Nevertheless, as it becomes increasingly to companies’ advantages and consumers’ self-interest, EV’s inflection point appears to draw ever closer, as governments adjust the auto market’s parameters, companies respond to a new regulatory landscape and dynamic market forces, and technology keeps driving down prices.

Alliance for Automotive Innovation, 2021, Reading the Meter: A Look Inside A Cleaner, Safer, Smarter Auto Industry.

Hagerty, Michael, et al. “Getting to 20 Million EVs by 2030 Opportunities for the Electricity Industry in Preparing for an EV Future.” The Brattle Group, June 2020.

Stock, Kyle, and Keith Naughton. “Your Next Car Will Probably Be an Electric Pickup Truck.” Bloomberg.com, Bloomberg, 10 Dec. 2020, www.bloomberg.com/news/features/2020-12-10/electric-cars-ford-f-tesla-tsla-others-plan-battery-powered-pickup-trucks?srnd=hyperdrive.