The world is drowning in an ocean of plastic. Its emissions-heavy production is a significant contributor to climate change and its waste spans the globe, posing its own environmental and health risks. To find solutions, governments will need to implement tougher restrictions and companies need to own their responsibility for the problem.

Recycling, the most obvious solution, has come under scrutiny in recent years. A landmark 2017 study in SciencesMag found that of all the plastic waste produced globally from 1950 to 2015, only 9 per cent was recycled, 12 per cent was incinerated, and 79 per cent accumulated in nature or in landfill.

Even in developed countries, most waste ends up in landfill. In the United States, the world’s second-largest waste generator, plastic waste has ballooned in the postwar period, according to data compiled by Environmental Protection Agency. As total solid waste has increased by a factor of three in the past 60 years to a total 292 million tons per year, plastic waste has increased tenfold over the same span (Figure 1). 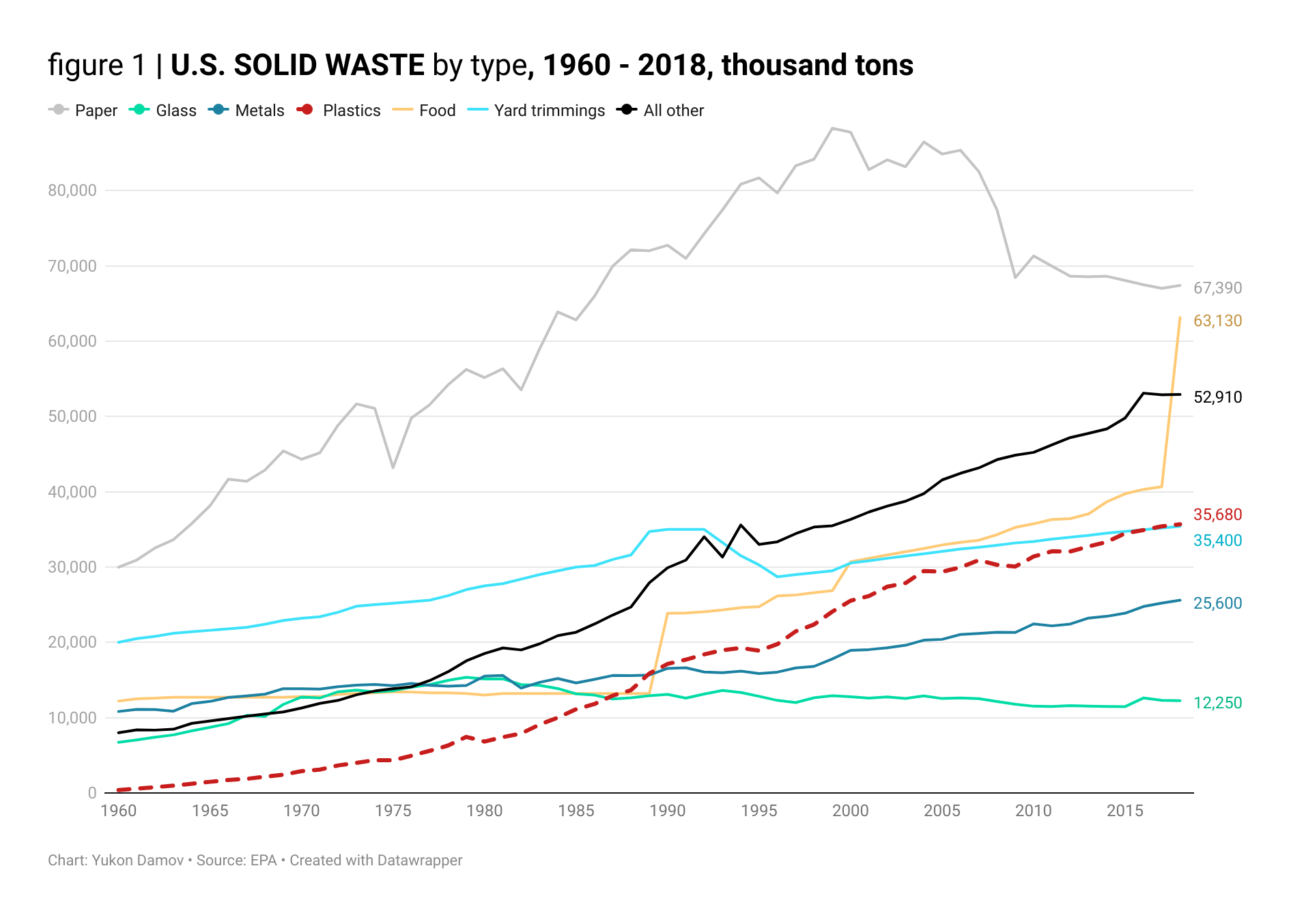 From generating nearly zero waste in 1960, plastic now makes up 12 per cent of overall waste, the fourth largest source of waste in the U.S., after paper, food, and “Other.”

At the same time, by 2018 (Figure 2), the majority (53 per cent) of America’s waste went to landfill, while only 24 per cent was recycled. And plastic recycling comprised about 5 per cent of total recycling, leaving the rest to paper and metal. 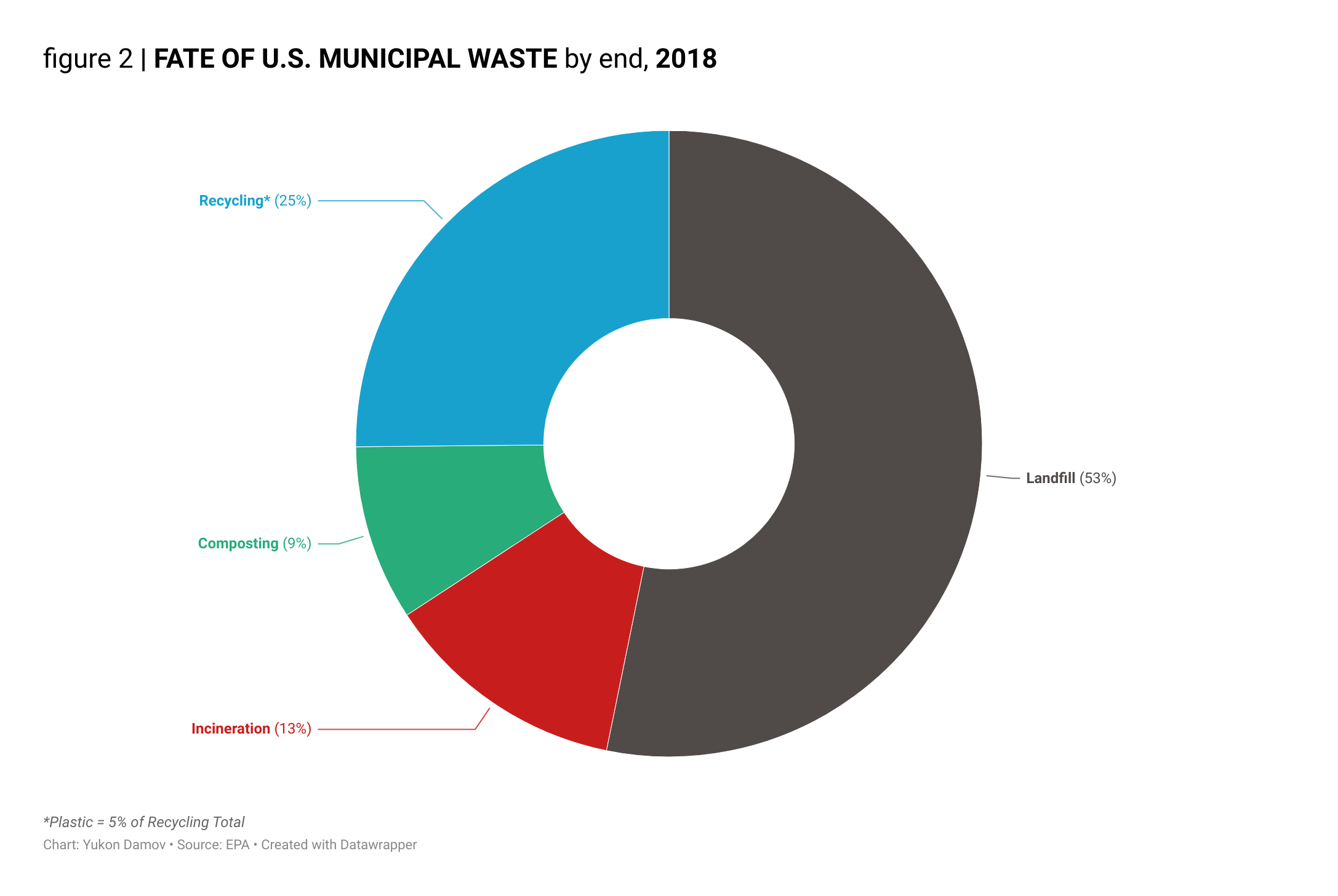 Since 1960, America has generated more waste per person (Figure 3), more of it is plastic, and most of it is going to landfill, in the U.S or overseas. 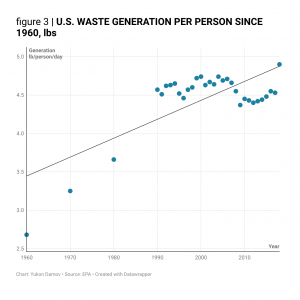 Many factors are working against recycling’s profitability. Even before China prohibited waste imports in 2019 and other countries followed suit, the market for recycled plastic was small and had tiny margins. Moreover, plastic generally loses value when it is recycled, as the process turns higher quality plastics into lower quality ones.

Recycled plastic also has to compete with virgin plastic, which becomes even more competitive as the price of oil falls. One study found that 98 per cent of plastic production derives from virgin feedstock; just 2 per cent of new plastic comes from recycled feedstock.

Improving the plastic waste problem will involve a combination of stricter government regulation, private innovation, and technological advancement. They work as a variation on the 5Rs: refuse (or restrict), reduce, reuse, recycle, and rot.

Halting and even reversing the amount of plastic waste generated probably also means reducing the amount of waste produced. Jurisdictions around the world are placing restrictions such as bans, taxes, or tariffs on plastic, especially single-use plastics, which has been proven to curb demand and waste.

Plastics companies are lobbying hard against these bans, but increased pressure from environmentalists, shareholders, regulators, and consumers will force producers to adapt or wither. Instead of promoting recycling as a way of shifting responsibility for plastic waste onto consumers, producers should take it seriously themselves by investing in recycling and re-use infrastructure, even their own as an extension of their own core business. Without private initiative, governments might force such changes upon the industry through extended-producer-responsibility laws.

For all its current flaws, recycling can be bolstered and improved. Governments can artificially shore up demand and boost prices for recycling, like they have done for renewable energy, but they can also support research into improved methods. The International Atomic Energy Association (IAEA), for example, is testing ionizing radiation in plastic recycling to improve its quality, allow for upcycling, and extend its lifecycle.

Plastic waste will outlive most of us – its circle takes forever to close — which is its central problem. Enlarging and improving the market for biodegradable materials can reduce the amount of plastic that sticks around for too long, eventually disintegrating into microplastics. Producing plastic-like products that rot (the 5th R), returns them to the Earth, closing the loop.

Gaia. “Discarded: Communities on the Frontlines of the Global Plastic Crisis.” Gaia. April 2019.

Glaum, Dan. “The Plastic Industry Is Growing During COVID. Recycling? Not So Much.” PBS Frontline. 17 February 2021.

Lerner, Sharon. “Waste Only: How the Plastics Industry Is Fighting to Keep Polluting the World.” The Intercept. 20 July 2019.

Rosenbaum, Eric. “Is recycling a waste? Here’s the answer from a plastics expert before you ditch the effort.” CNBC. 22 May 2021.

Smith, Catharine. “Here’s How Much Plastic You Eat Each Year.” Huffington Post. 6 June 2019.

Sparrow, Norbert. “What Lies Ahead for the Plastics Industry?” Plastics Today. 30 September 2020.

Sullivan, Laura. “How Big Oil Misled the Public Into Believing Plastic Would Be Recycled.” NPR. 11 September 2020. 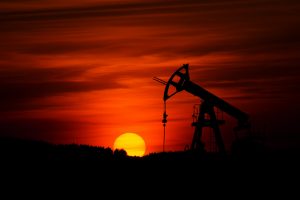